THE WORLD PREMIERE OF TYPO SQUAD! 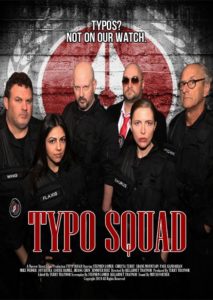 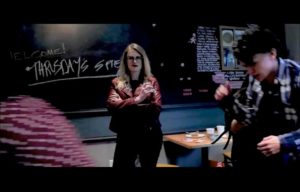 A SUPER MEGAFEST EXCLUSIVE: THE WORLD PREMIERE OF TYPO SQUAD!

Join us at the 2019 Super Megafest Comic-Con for an exclusive screening of the short film Typo Squad: Words Can Hurt You! SMF will be the very first convention ANYWHERE to screen this unique action comedy, so be sure to add it to your list of must-sees!

PLUS - THE CAST OF TYPO SQUAD WILL BE AVAILABLE FOR FREE PHOTO OPS!

Hosting the screening will be Typo Squad director Killarney Traynor, and the film’s star and author of the Typo Squad novel, Stephen Lomer. Who knows, there may even be a surprise guest or two! After the film, stick around for a lively Q&A, a discussion of how to get your film made if you have one in mind, and more!

To check out the Typo Squad teaser trailer, visit https://bit.ly/2MykWz4

The screening and panel will start at 2 p.m. on Saturday, November 16! See you there!

In a world where typos are lethal to 98% of the population, only one team stands ready to protect the public from the forces of errorism. That team is Typo Squad.

Killarney Traynor is a New England-born actress, novelist, stuntwoman, singer, and martial artist. Her debut novel, Summer Shadows, was released in November 2014, and achieved Bestseller ranking on Amazon's Cozy Mystery category within one month. Killarney works with Narrow Street Films as writer, director, and producer. She directed the short film Typo Squad, and is currently working on a short-film sequel to her movie The Dinner Party. When she isn't writing, she can usually be found rummaging through used book stores, scouring the internet for little-known Sci-Fi shows, getting lost in Boston, or searching for the perfect cup of tea.

Stephen Lomer is the Amazon best-selling author of the hugely popular Typo Squad book series, the short story collections Stargazer Lilies or Nothing at All and Hell’s Nerds and Other Tales, and the holiday novella Belle’s Christmas Carol. He also has featured stories in the anthologies UnCommon Evil, Once Upon a Time in Gravity City, and The Dystopian States of America. Stephen wrote the screenplay for, and starred in, the short film Typo Squad: Words Can Hurt You, and is the host of the YouTube series Tell Me About Your Damn Book. He’s a hardcore fan of the Houston Texans, despite living in the Hub of the Universe his whole life, and believes Mark Twain was correct about pretty much everything.