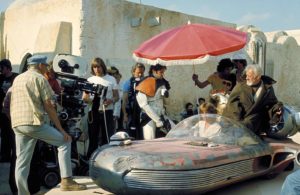 ﻿A Canadian actor, writer/director and composer from Montreal, Canada. Best known for his two roles in 'Star Wars - A New Hope', as the Jedi Mind-Tricked Sandtrooper and Fixer a friend of Luke Skywalker. He attended St. Thomas High School, Dawson and Vanier Colleges, Montreal. His first public performance at 15 was in a two hand stage production at the Israeli Pavilion, Montreal under the direction of Bill Millerd. He later joined Maxim Mazumdar's Phoenix Theater Company. He studied music composition in college and flute with Jeanne Baxtresser when she was principal flutist with the Montreal Symphony. Produced a number of successful rock albums during the 1980's for RCA Records following the creation of the nationwide UK, Battle Of The Bands.﻿