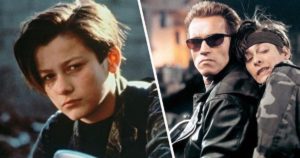 Edward Furlong was approached by casting agent Mali Finn, who was looking for a young actor to play the role of John Connor in what turned out to be one of the the biggest box-office hits of the 1990s, Terminator 2: Judgment Day (1991). Finn instantly recognized his ability, and suggested him for the part, feeling that he could hold his own playing opposite Arnold Schwarzenegger and Linda Hamilton.

For his career-starting role, Furlong earned an MTV movie award for best breakthrough role, and a Saturn Sci-Fi award for best young actor. From there, he took an unconventional route through Hollywood, which led to his working with some of the top people in the business, in both studio and independent films. His work has included starring opposite Jeff Bridges in American Heart (1992) for which he was nominated for an IFP Spirit award for best supporting actor. He has also starred in A Home of Our Own (1993) with Kathy Bates, Little Odessa (1994) with Tim Roth, The Grass Harp (1995) with Walter Matthau and Barbet Schroeder's Before and After (1996).

He also starred opposite Edward Norton in Tony Kaye's controversial and gripping drama American History X (1998) and in the hit comedy Pecker (1998). More recently, Furlong has been opposite Willem Dafoe in the prison drama Animal Factory (2000), directed by Steve Buscemi. He recently starred in Pupi Avati's 11th-century tale, The Knights of the Quest (2001) ("The Knights of the Quest").