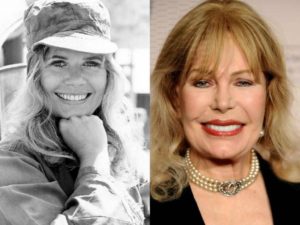 Loretta Swit is an American stage and television actress known for her character roles. Swit is best known for her portrayal of Major Margaret "Hot Lips" Houlihan on M*A*S*H, for which she won two Emmy Awards.

Starting in 1972, Swit played the lusty, extremely capable head nurse Major Margaret "Hot Lips" Houlihan in the television series M*A*S*H, a comedy set in an American mobile army hospital during the Korean War. Swit inherited the star-making role from actress Sally Kellerman, who portrayed Houlihan in the feature film. In the first few seasons her character was single and blindly patriotic, and she had no friends among the camp surgeons and nurses, with the notable exception of her married lover, Major Frank Burns, portrayed by Larry Linville. Over time her character was considerably softened. She married a lieutenant-colonel but divorced soon after. She became good friends with her fellow officers, and her attitude towards the Koreans in and around the camp became more enlightened. The change reflected that of the series in general, from absurdist dark humour to mature comedy-drama. Swit was one of only four cast members to stay for all 11 seasons of the show, from 1972 to 1983 (the others are Alan Alda, Jamie Farr, and William Christopher).

Swit and Alda were the only actors to have been in both the pilot episode and the finale; she appeared in all but 11 of the total of 256 episodes. Swit received two Emmy Awards for her work on M*A*S*H. Later, she was also the first M*A*S*H star to visit South Korea, when she narrated the documentary Korea, the Forgotten War.