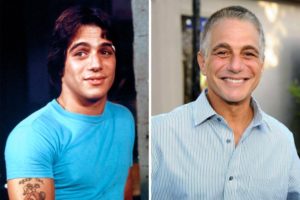 Danza starred in the television show Taxi, playing a cab driver and part-time boxer Tony Banta, and later starred on Who's the Boss?, in which he portrayed a former baseball player, housekeeper, and single father Tony Micelli. For his contribution to the television industry, in 1988, Danza was honored with a star on the Hollywood Walk of Fame at 7000 Hollywood Boulevard. Danza also plays the role of a baseball player in Angels in the Outfield (1994).

He was nominated for an Emmy Award for a guest-starring 1998 role in the TV series The Practice. His movie debut was in the comedy The Hollywood Knights (1980), which was followed by Going Ape! (1981). He received critical acclaim for his performance in the 1999 Broadway revival of the Eugene O'Neill play The Iceman Cometh. In 2002, Danza released his debut album The House I Live In as a 1950s-style crooner.

Danza hosted his own TV talk show, The Tony Danza Show, that was produced each weekday morning in his hometown of New York and was syndicated across the US.