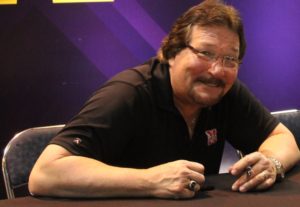 Ted DiBiase is an American former professional wrestler, manager, ordained minister and color commentator. He is signed with WWE working in their Legends program. DiBiase achieved championship success in a number of wrestling promotions, holding thirty titles during his professional wrestling career. He is best recalled by mainstream audiences for his time in the World Wrestling Federation (WWF), where he wrestled as "The Million Dollar Man" Ted DiBiase. IGN called DiBiase "one of the most gifted technical wrestlers to ever grace the squared-circle"; he has been named as one of the greatest villains in pro wrestling history.

Among other accolades in the WWF/E, DiBiase was the first WWF North American Heavyweight Champion, a three-time WWF Tag Team Champion (with Irwin R. Schyster), a one-time WWE 24/7 Champion, and winner of the 1988 King of the Ring tournament. He held the WWF World Heavyweight Championship once, although recognition of this reign was withdrawn by the company. DiBiase also awarded himself the Million Dollar Championship, which was held by various associated wrestlers. He appeared in the main event of multiple WWF cards, including WrestleMania IV and the first-ever SummerSlam in 1988. DiBiase also headlined the 2010 WWE Hall of Fame ceremony, being inducted by his sons, Ted Jr. and Brett.